**I'm actually 13 weeks as of today but since I take my weekly photos on the weekends I will likely be posting a week behind. 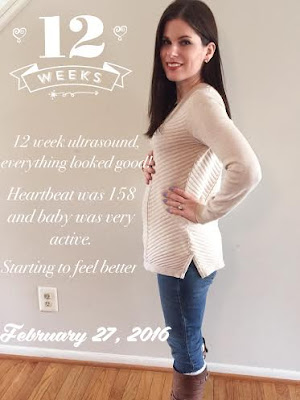 Size of baby: A lime- the baby now has reflexes and will soon be able to open and close it's fingers

Total Weight Gain/Loss:  Based on what I weighed at my ultrasound I've gained about 4 pounds total.

Maternity Clothes: None yet but my pants are starting to get tight.

Sex: It's another BOY!! Brothers!
I can't believe it, so much for mother's intuition. I was hoping we would be able to confirm on the 12 week ultrasound but it was still too early. So we will hopefully get final confirmation in April at our anatomy scan.

Movement: I can't feel anything yet but during the ultrasound he was waving his arms around like he was at a rave.

What I miss: nothing

Symptoms: The nauseous seems to be dying down but still present a little at night and I'm slowly getting energy back and my belly has definitely popped!

Best Moment this week:  Seeing him on our 12 week ultrasound. We took Hunter with us so he got to see his little brother waving at him which was very cool. Everything looked normal! Also, announcing on Facebook and IG that we are having a little boy.


What I am looking forward to: Shopping for the nursery and getting some new boy stuff!
Posted by Shannon at 2:00 PM No comments:

We found out the results from our panorama blood test which also determines the gender with 99% accuracy and we are having .... 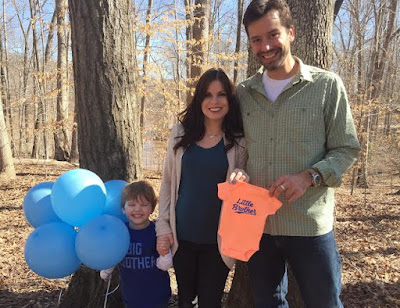 Hunter is getting a little brother!!

I should also mention that all of the genetic testing came back normal as well which was the most important part! We are feeling very blessed. 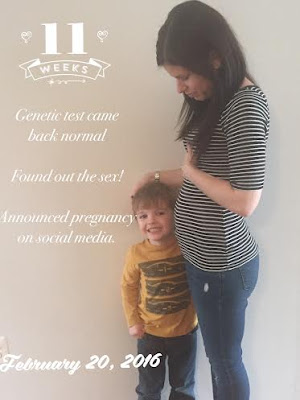 Size of baby: A fig- at just over 1 1/2 inches long the baby is now almost fully formed!


Total Weight Gain/Loss:  Haven't weighed myself recently but the bump is starting to show.

Sex: We found out last week but haven't announced it on social media yet, waiting until after our 12 week ultrasound!

What I miss: nothing new

Sleep: I have good nights and bad nights

Symptoms: still a bit nauseous at night but it's getting better

Best Moment this week:  Hearing that the panorama test came back normal and finding out the sex!!


What I am looking forward to: The 12 week ultrasound and seeing the baby on screen again!
Posted by Shannon at 1:16 PM 1 comment: 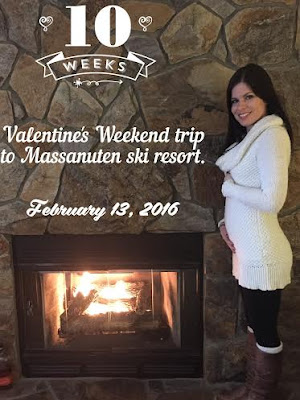 Size of baby: A Kumquat- the baby now has completed the most critical portion of development. Vital organs are in place and starting to function.


Total Weight Gain/Loss:  Based on what I weighed at my 10 week appointment I haven't gained anything additional but started about 5 pounds up from the last pregnancy.

Sex: I took a blood test at my doctors appointment that will test will possible genetic abnormalities and will also tell us the sex. We should know next week!

What I miss: Not much. Just my energy and having a better appetite at dinner but can't complain too much.

Symptoms: tired but mainly from not sleeping well and still nauseous in the evenings.

Best Moment this week:  Hearing the heartbeat on the doppler at the doctors appointment (170!) and everything looking good. And our weekend trip to Massanutten ski resort which was wonderful and relaxing.


What I am looking forward to: Getting the results of the blood test and finding out the sex!
Posted by Shannon at 1:14 PM No comments: 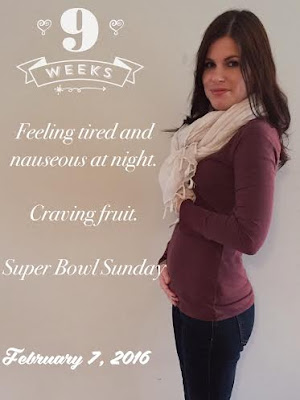 Size of baby: Grape- the baby is nearly an inch long and weighs a fraction of an ounce.


Total Weight Gain/Loss:  I don't think I've gained anything additional but starting out higher than I did before.

Sex: Not sure but we may do the panaroma blood test which will tell us the sex in the next couple weeks!

What I miss: sleeping well at night. Pregnancy insomnia has hit. I bought a snuggle pillow and that's not even helping.

Symptoms: Still feel crappy at night. Nauseous with no appetite in the evenings. Feel pretty decent during the day. Boobs are growing which is fun.

Cravings: Fruit which I think I craved with Hunter too.

Best Moment this week: We told Kristian's uncle who has been asking us when we would have another since I was still pregnant with Hunter!


What I am looking forward to: My 10 week doctor appointment and hopefully finding out the sex in the next couple weeks. Going on our Valentine's Day trip to Massanutten.
Posted by Shannon at 1:13 PM No comments: 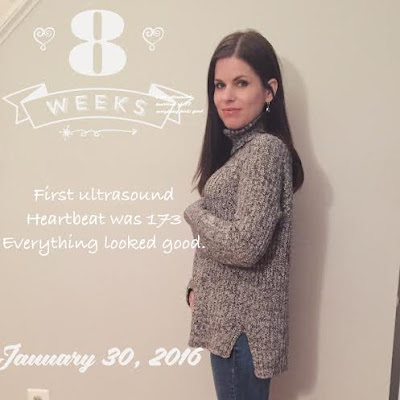 Size of baby: A kidney bean- webbed fingers and toes are showing, breathing tubes extend from the throat to the developing lungs.

Total Weight Gain/Loss:  I was weighed at my doctors appointment however it was after lunch and I was fully clothed so it wasn't the most accurate. I'm about 4 pounds up from where I was with Hunter this go around but I started off weighing more thanks to the holidays.

Sex: Still getting a girl vibe. Hunter is convinced it's a girl.

What I miss: Having a better appetite

Sleep: Not sleeping well. Fall asleep great but wake up and can't get back to sleep.

Symptoms: Still tired thanks in part to not sleeping well and still nauseous mainly at night. Unisom helps with both issues.

Best Moment this week: Our first ultrasound and seeing ONE healthy baby with a heartbeat of 173. Such a relief and always so neat seeing that for the first time. Doctor said everything looked great.

What I am looking forward to: My next doctors appointment at 10 weeks and starting to figure out what we need to get. Telling everyone.
Posted by Shannon at 1:12 PM No comments: 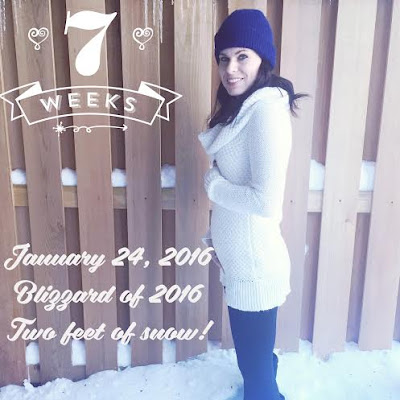 Size of baby: A blueberry-Hands and feet and arms and legs are developing


Total Weight Gain/Loss:  I haven't weighed myself lately but I've maybe gained a pound or two.

What I miss: energy and not feeling nauseous everyday.

Sleep: Some nights are better than others
Symptoms: Exhuasted and wanting to nap everyday. Nauseous mainly in the evenings. Haven't been able to workout lately due to both issues.

Cravings: Not much except maybe carbs

Best Moment this week: The blizzard of 2016 and getting 2 feet of snow! Being snowed in for 5 days with my little family.

What I am looking forward to: Our first doctors appointment/ultrasound this week.

Posted by Shannon at 1:11 PM No comments:

**I've been doing my weekly updates and saving them until I made the pregnancy public, figured now was a good time to press post! ** 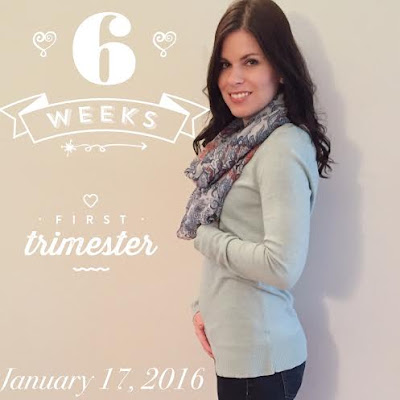 Size of baby: A lentil- the nose, mouth and ears are beginning to take shape.
Total Weight Gain/Loss:  this pregnancy I've started out higher than when I got pregnant with Hunter thanks to getting pregnant during the holidays when I was also stressing eating due to work. I don't think I've gained anything extra though due to pregnancy at this point but I'm not really weighing myself often.

What I miss: energy and having an appetite

Sleep: Not great, lots of tossing and turning
Symptoms: Tired (though not sleeping well). Nausea on and off and not much of an appetite.

Best Moment this week: Making it through another wek.
What I am looking forward to: Our first doctor appointment next week where we will hopefully see a nice strong heartbeat.

Posted by Shannon at 1:09 PM No comments:

The road to baby #2 was not nearly as quick and easy as it was with baby #1. With Hunter I was fortunate to get pregnant pretty much the first cycle we tried/didn't prevent. Despite it happening so quickly with him I really didn't expect the same for the second, however, I also didn't expect it to be as long of a process.

I decided to get off birth control right before Hunter turned 2. I really wanted about a 3ish year age gap and figured even if it took a few months that timing would work out well. I gave my body a few months to get all the hormones from the birth control out of my system but by January I figured any time would be great. Well thanks to my crazy, long, irregular cycle things didn't happen as quickly as I had hoped. In fact, at one point it had been about 4 months without a period or ovulation (which I knew from temping and tracking my cycles) and finally my doctor decided to induce my period. A couple weeks after my induced period, in early December of 2014 I got pregnant again! Sadly, about 2 weeks after I found out I was pregnant I had a miscarriage, the day before Hunter's 3rd birthday.

Fortunately my doctor didn't see any reason why I shouldn't try again and we decided after a few months if I wasn't pregnant again I would do some tests and maybe move onto medication (which I was hesitant to do). Well after a few months I was not pregnant again and my doctor decided to run some tests including an ultrasound to check for any cysts or blockage. Fortunately all my tests came back normal so we couldn't really determine why I wasn't ovulating normally or getting pregnant.

After a lot of thought and discussions with a very hesitant husband I decided I would try Clomid. Well in order for that to happen my husband also had to be tested (which he was less than thrilled about) but thankfully all of his tests came back normal. So after another never-ending cycle I took medicine to induce my period once again and start my first round of Clomid which was July 2015.

Thanks to the Clomid I did ovulate on a pretty normal schedule, anywhere from day 18-20 of my cycle. However, I still wasn't getting pregnant. On my fifth round which started in November of 2015 my ovulation was late once again. During this time I had my annual checkup with my OBGYN and told her I was late ovulating. She said sometimes the Clomid doesn't work and to give it a couple more weeks and we could induce my period again and try one last round (they only allow 6 rounds) and we could up the dosage for the last round. Well FINALLY on day 34 I ovulated and two weeks later saw the two little lines I had been praying and waiting to see! As it turns out from talking to my doctor, given how long it took me to ovulate the last cycle she doesn't think the Clomid actually worked and I finally just ovulated on my own, go figure!

Even though it was a long and often frustrating process I do believe everything happens when it's supposed to. And though the age gap is a bit bigger than I had hoped for I do like the fact that Hunter is now at an age where he's not only pretty independent but can help us out quite a bit. I don't know if I could handle 2 under 2 or even just having 2 in diapers at the same time.
Posted by Shannon at 12:16 PM 7 comments: 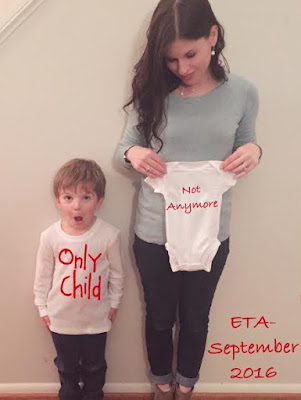 We are so excited to be welcoming a new little addition this September!
Estimated Due Date- Labor Day!