Kristian returned safe and sound and in one piece on Wednesday from his bear hunting adventures sans bear. He did however kill a deer which is what the boys ate on Tuesday night while in the woods. Vom. He had a great time and I too enjoyed having a few days with the house all to myself.

On Thursday we woke up and watched the Macy's Thanksgiving Day parade while I made a yummy sweet potato and pecan casserole. We headed to his parents house where we joined his sister, her boyfriend and my nieces and nephew for a fabulous dinner. Usually they have their whole extended family but this year decided to keep things small which was really nice and relaxing. I stuffed my face with the usual Thanksgiving fair and wound up on our couch later that night feeling like I was going to give birth to a food baby. So all around it was a successful day!

I only took three pictures, my in-laws took a bunch but haven't sent them to me yet so I apologize for the lack of photographic documentation of my holiday. 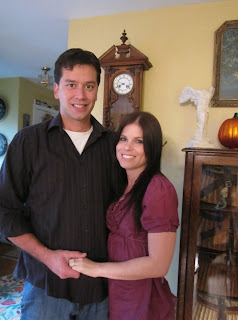 Our third Thanksgiving together but our first as a married couple!
(I don't know why we were doing a prom pose) 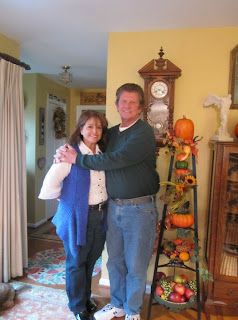 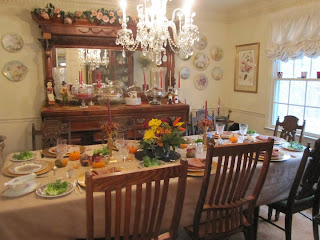 The amazing table setup. My mother in law ranks right up there with Martha herself.
I hope everyone had a wonderful holiday.
Posted by Shannon at 2:22 PM

Glad to hear he is safe and sound

omg you guys look like the quintessential traditional thanksgiving family...even watching the thanksgiving macy's parade which i never do. love it!

Glad you had a good holiday and that he made it back safely!

First Thanksgiving as a married couple. Gotta love it, right:)

i'm loving the prom pose!! looking cute!! and your in laws are adorable :)